After recent Closed Circuit TV (CCTV) inspections of some 45 kilometres of sewer mains in Leongatha and Korumburra a number of pipelines have been identified as needing rehabilitation and repair.

South Gippsland Water’s Managing Director, Philippe du Plessis said, “The Corporation operates a program of sewer relining for deteriorating and ageing sewer infrastructure. Infiltration hot-spots due to broken pipes are identified through CCTV monitoring of the sewer systems. These hot-spots allow ground water and tree root infiltration of the sewer”.

Mr du Plessis went onto say that, “Relining the pipes is a cost efficient way of repairing sewer mains without needing to excavate and replace the pipe which is difficult, disruptive and expensive. The cured in place liners used are a structural liner (pipe in pipe) which apart from repairing the pipe, add an extra 50 year life span to the asset”.

“Commencing from 6th May 2019, this next stage of sewer relining work will be for 4,000 metres of 150mm sewer main in various parts of the Leongatha township. Work will take approximately 5 weeks to complete with affected residents notified prior to work commencing”.

“The completion of this stage of work will finish the Corporation’s relining program for the financial year, which has seen some 11,000 metres of sewer mains relined in Inverloch, Korumburra and Leongatha. Next year’s program will begin in September 2019”.

How does the process work?

A long continuous section of PVC pipe is made to length, then the sewer pipe in question is cleaned (jetted with high pressure water) and inspected with a CCTV camera which determines the condition and extent of infiltration.

Notification to customers regarding works advises that during the relining process, toilet lids should remain closed and if possible a heavy object, such as phone book be placed on top. In rare cases the high pressure cleaning process can cause air to bubble up from the toilet. This is rare, but may occur where the properties plumbing has either blocked off toilet vents or blocked or covered the overflow relief gully.

Once cleaned, the next stage is to prepare the liner for installation. The liner is then heated using steam, making it pliable. Once the liner is hot and flexible it is inserted into the existing sewer pipe.

Once installed it is pressurised with hot steam, pushing it out against the wall of the existing pipe. This pressure is maintained for approximately 30 minutes. After this time pressure is reduced slowly, allowing the PVC liner to cool. Once cooled the plastic returns to a ridgid pipe and fully seals the sewer. During this curing stage some residents may notice a plastic or epoxy smell, however this quickly dissipates.

A small robotic cutter is sent into to cut out any junctions where homes and businesses connect to the sewer pipeline. As a continuous piece of PVC liner is used in the process, there are no joins which may break in future, meaning that the expected lifespan of the repaired sewer is extended.

See below a before and after photograph from a sewer relining project at Port Welshpool. 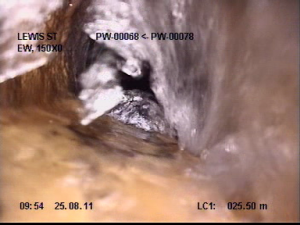 [Image] Before: Approximately 35 litres per minute of groundwater entering the sewer through a break in the pipe 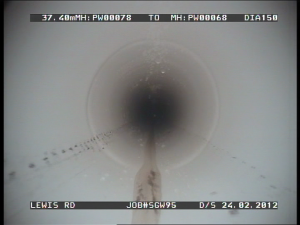